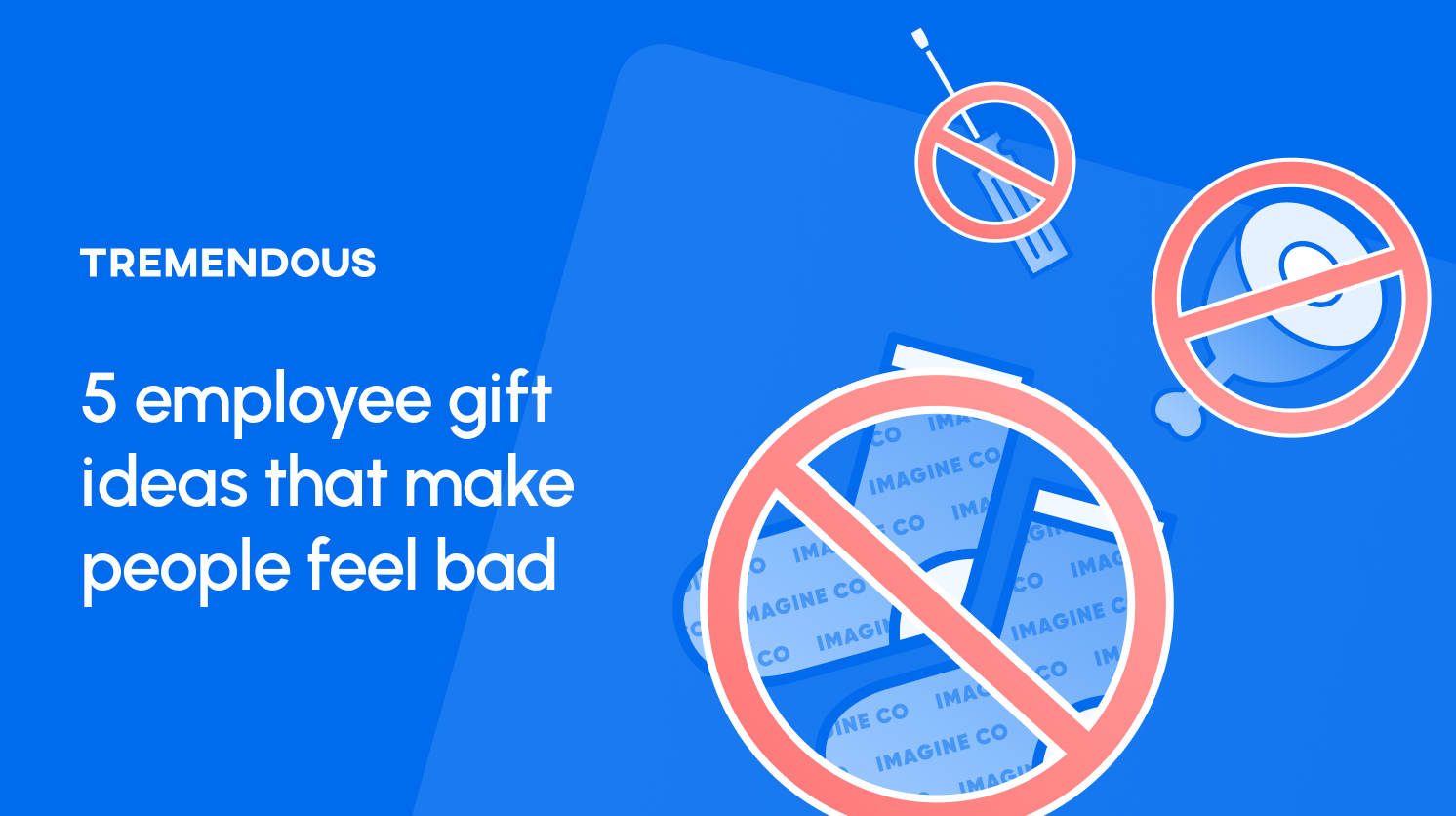 Some companies pay to make their employees feel worse. And they do this by sending $5 hams, screwdrivers, jars of jam, umbrellas, and salt as employee gifts.

We know this for a fact, because we recently conducted a survey of 1,500 employees working across ten industries to find out what they really thought of employee gifting.

We learned that the overwhelming majority of survey respondents felt appreciated by employee gifts: 75% reported that their job satisfaction increases when they get a good one. We also learned that 65% of people just want money.

But a bad employee gift can make people feel small. In fact, 31% of surveyed employees have received a gift that made them feel distinctly unappreciated. In other words, it was worse than receiving no gift at all.

You don’t want to spend money to make your employees feel bad. So we put together a list of gifts to avoid based on our survey results.

Almost nobody wants company swag as an employee gift

We received hundreds of responses from people who have received company swag as a gift, and nobody was too happy about it. Only 2% of respondents said swag was their favorite gift to receive, and only 18% put it in their top 5.

One construction worker said company swag as a holiday gift “lack[s] a feeling of thought and consideration.”

This, obviously, is antithetical to the goal of employee appreciation. Others received swag in such a thoughtless way that it made them not just bummed, but angry.

“It was company swag (a stone drink coaster with the company logo on it) that I had to sign a form for and that form allowed the company to then tax me on that ‘gift’ as income,” wrote one respondent working in wholesale and retail. “Huge misstep by the administration. Distorted trust. It backfired and made people angry.”

But more broadly, people found company swag to be a lackluster gift because they regarded it as something that still only serves the company.

“When I am gifted company swag, I feel it is really just part of the uniform, which should be provided regardless,” wrote one respondent.

Company swag as an onboarding gift when people join a company makes sense, but around the holidays, it may come off like business leaders and HR simply had some extra hoodies lying around.

“If it’s a thought out gift it’ll raise morale, but if it’s company swag chances are it wasn’t well thought out,” said one respondent, who works in operations.

A gift card to a specific retailer is the most common holiday gift employees receive, with 37% of respondents reporting it’s what they’ve gotten in the past.

However, a gift card to Olive Garden or Buffalo Wild Wings can backfire in a big way if it’s not a place the recipient would normally shop or offers goods they categorically dislike.

Furthermore, a small denomination, especially for an expensive brand, can come off as insulting and out-of-touch.

“It was a small gift card to a store with expensive items, so it was essentially worthless to me,” wrote one respondent. “Would have preferred a small Visa card or gift card to a grocery store - something I could actually use.”

“We got a $10 gift card to Amazon the one year and it was like, wow, a whole $10? That’s enough to buy me, like, a pack of socks maybe. It’s a pittance and it’s kind of more insulting than just not getting anything,” wrote someone in operations and productions for a construction company.

Even if the store isn’t expensive, giving a meager dollar amount to any location comes off as rude to most people.

“I got a $5 grocery gift card. Excuse me?? What the hell am I supposed to buy with $5?” said one respondent.

Particularly during a time of considerable inflation, $5 anywhere won’t get you too far.

Another trap to avoid is giving employees a gift card to their own place of business. It sounds obvious, but it does happen.

“The gift card was for a small amount of money to their own cafeteria,” said one baffled respondent, who works in transportation.

While gift cards to specific retailers can be thoughtful, they must pertain to a retailer the recipient actually likes. So, if you’re putting in a mass order for the entire company as an HR professional or business leader, it’s best to go with cash.

One respondent received “a $10 gift card to Starbucks. When they know I don’t drink coffee.” Needless to say, this misstep comes off as impersonal.

However, if you’re ordering gift cards for specific employees as their manager or supervisor, it’ll go over much better.

“My supervisor sent me a $50 gift card for Sephora,” said one respondent. “She knows I love makeup, so I appreciated that.”

Survey says: not really. While gift cards to a grocery store for a reasonable amount of money are well-received by most, a gift card for a specific food item, a gift box of snacks, or artisan items that people aren’t really into are generally not appreciated.

Our survey revealed most people want the gift of choice. So sending people a specific snack or food item, while it may be perfect for a select few, will likely miss the mark with most. It’s a presumptuous gift that hinges too much hope on luck.

Yes, some people may be a big fan of fancy nuts, but it’s unlikely this is a ubiquitously appealing gift.

“It was a box of peanuts,” said one nonplussed respondent, who works in operations and production.

“Gift card for turkey,” said another respondent in manufacturing. “I actually gave the card away.”

While turkey may seem like a festive gift, we got several negative comments about it, and not a single positive one. Ditto for ham.

“All I got was a $5 ham…makes you realize they do not care about the people that help make them all that money,” said an employee.

It’s worth noting that many people may have already had their fill of both of these holiday staples. Holiday gifts generally arrive after Thanksgiving.

“I think anyone who only receives a turkey or ham tends to feel unappreciated,” wrote one respondent. “That is what happened to me considering I already had two. I couldn't keep it because I also had ham so I did not have room in my freezer or my fridge.”

Worse still is a food-related gift in lieu of a bonus or raise. If the leadership team is skimping on holiday bonuses for the year, it’s best not to spend extra change on specialty foods as a tepid apology.

“Our boss had recently let us know that we weren’t going to receive end of year bonuses,” wrote one respondent, an administrator. “And then he gave everyone an impersonal package of three jams and jellies. This was literally what Chevy Chase’s character went through in National Lampoon’s Christmas Vacation. I was embarrassed for my boss being so out of touch.”

Household items are boring and cheap

It’s understandable to want to get employees a gift they’ll actually use. However, some HR departments and business leaders go overboard.

While people do want a gift they can put to use in their everyday life, they don’t want something so utilitarian that it’s utterly unexciting.
‍
“I was given a screwdriver at one of my old jobs when we had record breaking numbers,” wrote one respondent in sales.

Several people received umbrellas as a holiday gift. While useful — except perhaps for one respondent who lives in the desert — it’s safe to say umbrellas don’t generally make people feel warm and fuzzy inside.

“I once worked for a facility that gave us each a cheaply made umbrella as a Christmas gift,” another respondent wrote, who works in operations and production for a transportation company. “That gift made me feel bad about myself and the job I was doing for the facility.”

It’s also best to avoid socks. Everyone already has socks, and realistically, they will likely also get socks from someone else during the holiday season. It’s the standard go-to for people who don’t know what else to buy.

“My boss gave us dollar store Christmas-themed socks one year,” said an administrator for a transportation company. “It was so cheesy and weak. She should have been ashamed.”

Ultimately, if you’re going to get employees a specific gift rather than money or a gift card, the pressure is on. People expect something thoughtful and novel. Anything short of that will probably fall flat.

“It was literally a water bottle,” one person in ops and production wrote.

It’s safe to say your direct reports, coworkers, or employees probably already have enough water bottles, but nobody will say no to more money.

Team dinners and pizza parties feel patronizing for some

Bankrolling a team dinner to a fancy restaurant is a great way to reward employees for an especially good quarter or a successful initiative. However, as a holiday gift, team dinners are polarizing.

“It makes me feel appreciated,” wrote one respondent, who works in food service. “When we have dinners or team building experiences, it can be a good time for coworkers to see each other in a different perspective. Maybe even meet each other’s families.”

However, team dinners that are essentially a pizza party in the break room can strike some as cheap and infantilizing.

“It was a pizza party,” one transportation worker said. “We’re adults. Not kids.”

“By the time I was even informed of said pizza party, the pizza was nearly gone,” one person wrote. “Out of 40 pizzas and 100 employees, I got one slice, and it was cold.”

Moreover, many attendees of the pizza party will likely just be thinking about how they would have preferred that the money was allocated to them directly.
‍
“A thank you note or a pizza party isn’t an employee’s favorite because they’re looking for a little extra money as a thank you,” said one respondent.

Even dinner at a nice restaurant can strike some as a lukewarm effort to motivate employees.

“I hate dinners because it is an extra obligation,” wrote one employee.

While there are many, many detractors who dislike the team dinner tradition as a gift for the holidays, others do appreciate the chance to get to know their coworkers outside of a workplace setting.

“A personalized note card or a team dinner with my boss or bosses seems authentic,” one respondent said.

So, reviews are mixed. But most respondents who had received a pizza party or team dinner found the gesture unsatisfactory.

This breakdown of the data makes it sound like people are exceedingly difficult to please. However, the opposite is true: The majority (65%) of respondents agreed on exactly what they wanted for the holidays: money.

We asked people to rank their top 5 favorite gifts to receive for the holidays. And the top 3  winners were: money (cash or check), money (added to paycheck), and money (Visa gift card).

So, when in doubt, send money.

For a more granular look at what employees actually want this holiday season – down to the dollar amount – read our white paper. 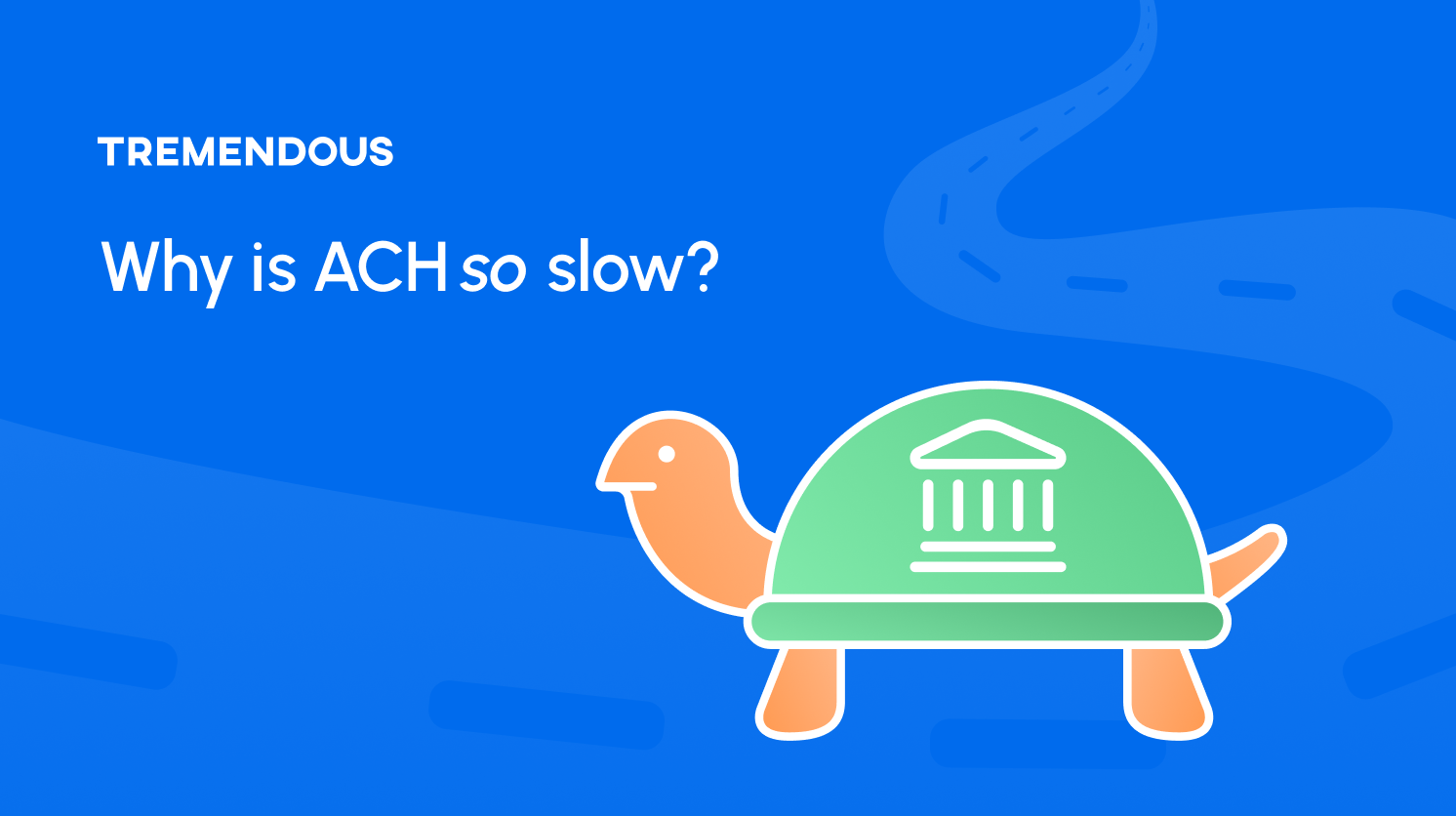 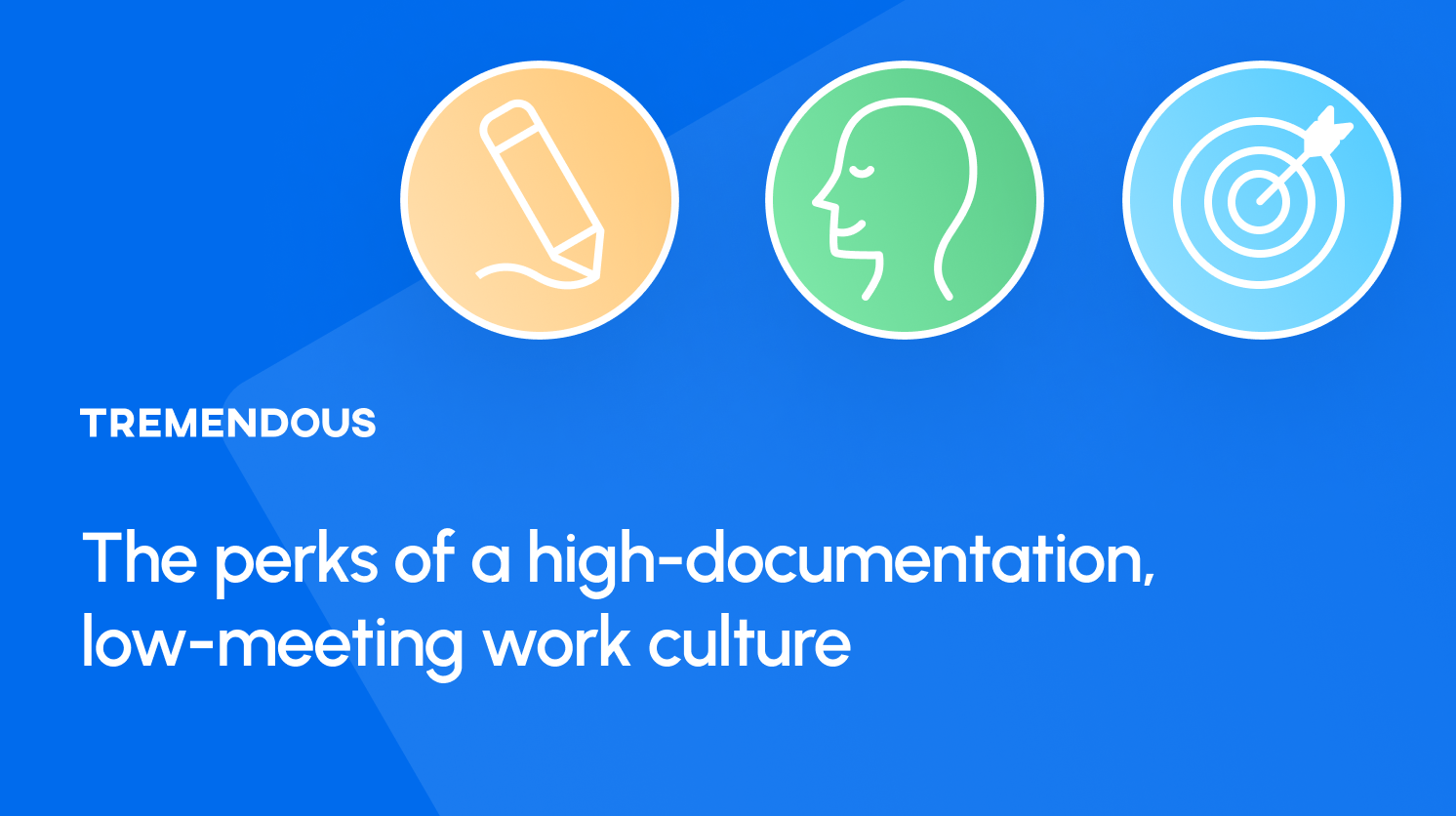 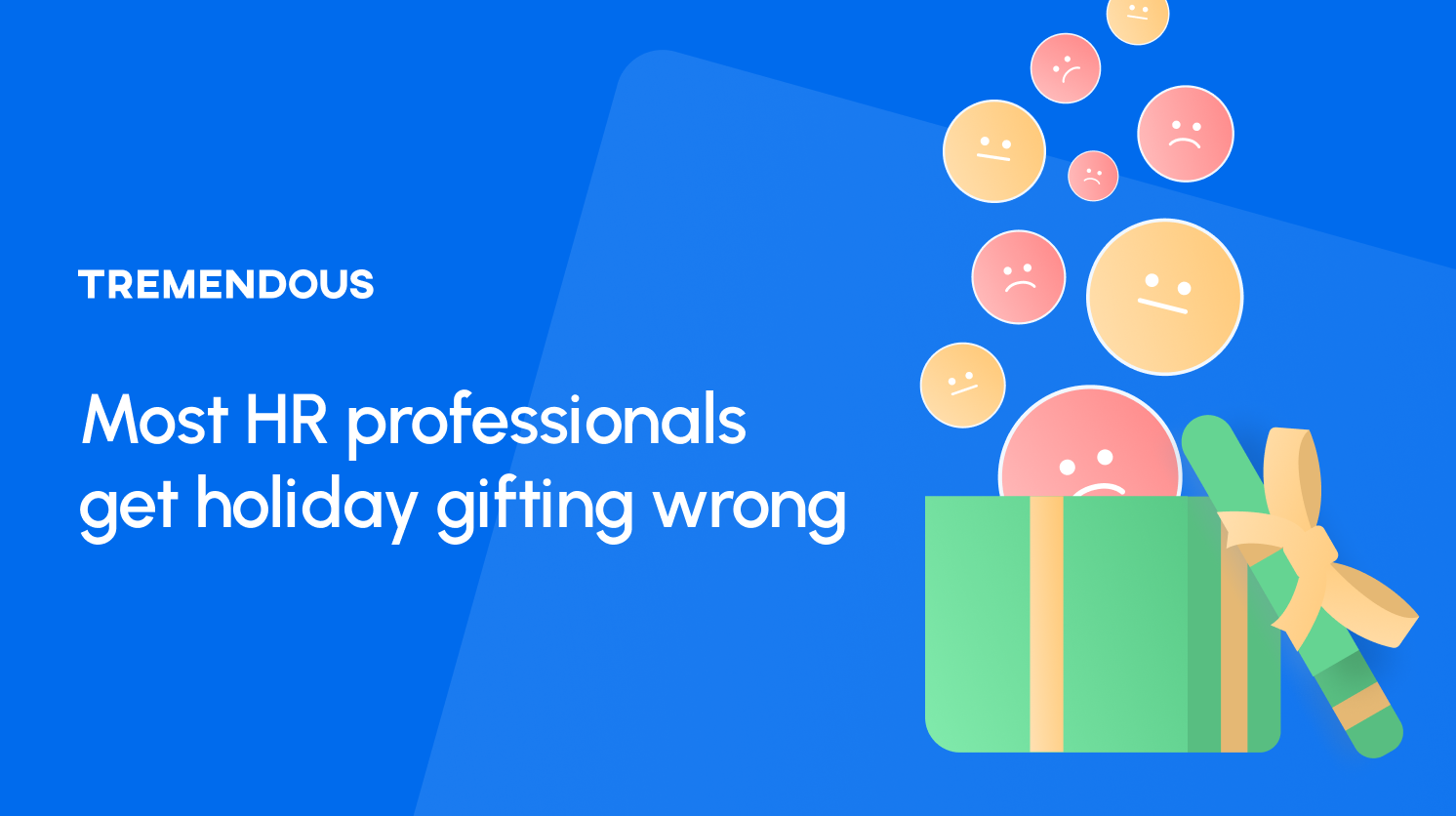